“The commitment of Celli to reduce the environmental impact of its products and production processes is genuine and not dictated by fashion. The quantity and quality of the investments made over the years is proof of this.” (Comm. Goffredo Celli, President & CEO)

Moving to an Eco Friendly Future 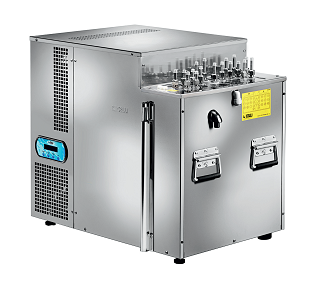 Underpinning the Celli business ethos is Life Cycle Thinking – a common sense environmental program that focuses on a “philosophy of the 6 Rs”. These ‘Rs’ stand for Rethinking the product and its functions; Reducing energy and materials consumption; Replacing harmful substances with more eco-compatible alternatives; Recycling materials; Re-using parts where possible; and Repairing product rather than replacing. Over recent years, the company has identified new solutions to replace R134a – including CO2 and Solstice® ze – in response to global warming becoming its top environmental priority. As part of the Life Cycle Thinking programme, Celli set up a field test to assess the performance of Solstice® ze against R134a in beverage dispensers with motors from ½–1hp power output. The Honeywell technology was selected for its low GWP and its ability to charge systems with more of 150g of refrigerant, so avoiding the use of potentially hazardous hydrocarbons.

For the field test, Celli selected its Brave 30ES dispenser unit, which holds UN EN ISO 14021:2002 certification covering energy savings and reduced CO2 emissions. This model can be used as a water dispenser, pre-mix or post-mix unit when a CO2 source to carbonate water is included. Tests were conducted as post-mix unit. Using Solstice® ze, this non-modified three tap system recorded a 20 % reduction in power consumption, even while showing a close to 20 % lower refrigeration capacity, thereby offering an equivalent CoP to R134a. The only adjustment made was to the refrigerant charge (5% more for Solstice® ze versus R134a) – the evaporator, condenser, compressor and capillary tubes all remained as per the original equipment specification. Critically, from Celli’s perspective, the trial proved the environmental benefits of Solstice® ze, with >99.5% emissions reduction, along with lower discharge pressures across all measured ambient temperatures (a key contributor to extended product life). Consequently, Solstice® ze demonstrated its credentials as an effective refrigerant across all climatic conditions, ideally suited to global distribution.

“The company leaves no stone unturned and every year invests significant resources in the testing and industrialisation of new, increasingly environmentally-friendly machines. Where we see opportunities to mitigate our environmental impact – for example in the use of new refrigerants – these will be carefully considered and analyzed for the contributions they can make to a sustainable future.”
Luca Faedi, Responsible for Production and Technical Department

The Celli water dispenser using Honeywell’s Solstice® ze was first exhibited at the Mostra Convegno in Milan (Italy) in March 2012 – plans are now well advanced to demonstrate the refrigerant’s effectiveness in soda and beer coolers at a number of upcoming shows. Celli’s adoption of this technology reflects growing demand in the Food & Beverage market for the application of refrigerants with low GWP, energy efficiency and reduced carbon emissions in a global (all regions, all climates) and sustainable way. The table below illustrates the relative merits of refrigerants current in use in the F&B industry. 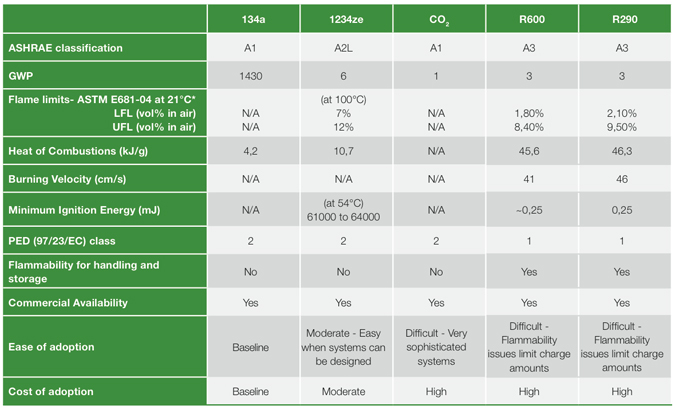 In just a few decades, Celli SpA has become the leading designer and manufacturer in Italy of refrigeration and dispensing systems for beer, soft drinks, wine and water. The company is an acknowledged leader in Europe and around the world both for its products – which it exports to 86 countries – and for its commitment to minimizing environmental impact, which is enshrined in a green program called Life Cycle Thinking. The company’s products and systems are produced in San Giovanni in Marignano, where it operates a policy of continuous innovation and originality. The success of this industrial-oriented philosophy is expressed through the relentless pursuit of quality, made possible through investment in advanced technologies and in its people. In keeping with its environmental commitments, Celli recently worked with Rivoira (Praxair Euroholding) to introduce Honeywell’s Solstice® ze refrigerant (HFO1234ze) as a globally compliant replacement for R134a in beverage dispensers. A field test involving the Celli Brave 30ES – with a Secop (formerly Danfoss Compressors) NL10MF compressor – compared the performance of Solstice® ze against R134a, which had previously been specified by the company. Solstice® ze is a refrigerant based on hydro-fluoro-olefins (HFO) with a Global Warming Potential of just 6 and an atmospheric lifetime of 18 days – compared to measures of 1430 and 13 years respectively for R134a.