To ensure the validity of the test results, two identical refrigeration systems were compared – one using Solstice® 1234ze and the other, at the nearby Waitrose Canterbury store, using R290 (propane). The trial run by refrigeration expert company Klima-Therm comprised two air-cooled 180kW Geo clima machines using a combination of advanced adiabatic technology, liquid pump amplification, micro-channel condensers and a Frascold reciprocating compressor. HFO adoption did not require any change in chiller or component design.

The field test results showed a 22% reduction in energy consumption or the Solstice® 1234ze system compared with the R290 system.

The outcomes confirmed the findings of laboratory tests undertaken by Frascold, which compared the new HFO with R134a. In this analysis, Solstice® 1234ze cut energy consumption by almost 27 % and, despite some loss of capacity, the overall Coefficient of Performance (CoP) was better than R134a across a range of applications and conditions. According to compressors experts, performance with HFOs could be further improved through system optimization. 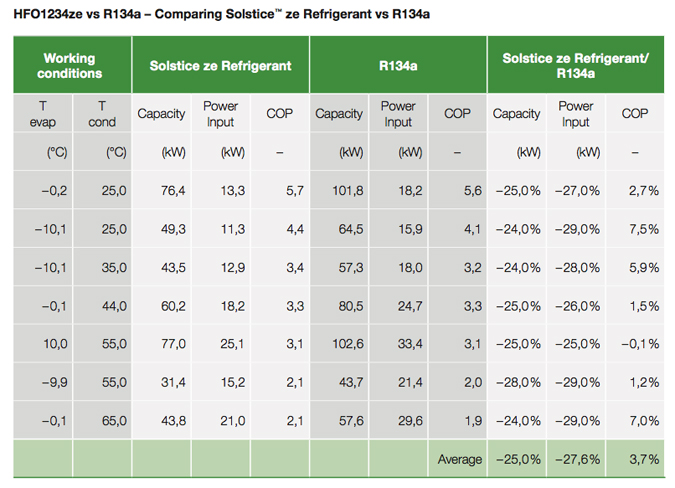 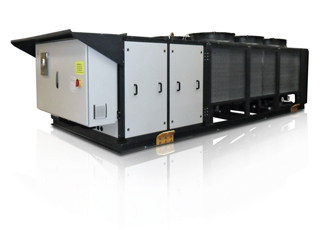 “If the on-going monitoring of energy consumption continues to prove successful, we plan to include HFO-based chillers in our choice of refrigeration platforms for stores in the future.” – Jim Burnett, Waitrose

“This HFO offers excellent performance, efficiency, serviceability and safety, but with a dramatically reduced carbon footprint that will permit its usage in the place of non-fluorinated refrigerants, while avoiding flammability risks.” –Paolo Ferraris, Managing Director, Geoclima

“The results of our tests have been entirely positive and the HFO systems are operating well. From a compressor engineering point of view, the properties and operating characteristics of HFOs are a very good match for traditional refrigerants, but obviously without the environmental penalty of high GWP HFCs.” –Giuseppe Galli, General Manager, Frascold

“The Waitrose trial system is operating very well, particularly when one remembers that it is not optimized for HFOs. The higher efficiency of HFOs, their low GWP and lower running costs make a compeeling case for the future.” – Roberto Mallozzi, Managing Director, Klima-Therm

The Eco-Friendly Solution for Compressor Symptoms

There are environmental and financial benefits in adopting Solstice® L13 (HFO-1234ze) as a sustainable approach to supermarket refrigeration.

The new Honeywell refrigerant is an important enabler for energy efficiency gains of around 27% compared with FCs such as R134a, contributing both to wider sustainability goals and financially-driven incentives, such as the UK Carbon Reduction Commitment. Moreover, implementation of Solstice® L13 is cost-effective and fast because only minor system adaption s required to achieve results similar to medium-pressure refrigerants like R134a. In addition, Solstice® L13 provides a global solution as a result of its efficient cooling performance in all climate zones .

From an environmental perspective, Solstice® L13 has a GWP of 6, thereby contributing positively to eco-design directives by both reducing direct CO2 emissions (by 99.6%) and improving indirect CO2 emissions as a result of lower energy consumption. Solstice® L13 is 100 % non-ozone depleting, benefits from low toxicity (ASHRAE class A) and is nonflammable at ambient temperature (ASHRAE class 2L). It is significantly safer in use than alternatives such as hydrocarbons and ammonia, which are either extremely flammable or highly toxic.

Focusing on a Low Carbon Future

Chiller technology is fundamental to the day-to-day operation of supermarkets – and it is an area that is increasingly the focus of innovation as food stores seek solutions to both energy and climate change challenges. Supermarket chains around the world are looking for refrigeration technologies that combine performance with low environmental impact– and Honeywell has responded by developing Solstice® L13 (HFO-1234ze), a new generation refrigerant that offers low GWP (Global Warming
Potential) and enhanced energy efficiency. The technology was specified recently for the world’s first HFO chiller trial when Geoclima units were installed by Klima-Therm in the Bromley store of leading UK supermarket chain Waitrose. At the same time, laboratory research confirmed the significant carbon footprint and energy efficiency advantages offered by Solstice® L13.

A Commitment to Carbon Reduction

Waitrose has made a public commitment to halve the impact of its refrigeration and cooling direct emissions (CO2e emissions tonnes) by 2012/13 (compared with its 2008/09 baseline).

The company is on track to achieve this target, having reduced emissions by 18 per cent in 2010/11, and by 20 percent since 2008/09. This is largely the result of fitting new refrigeration systems and establishing an extensive leak prevention programme. It is a position that has won the supermarket chain widespread approval and several cooling industry awards. In line with this overarching position, Waitrose agreed to participate in the world’s first field trial of an HFO chiller, manufactured by Geoclima, in order to compare performance – and carbon footprint – with its current range of hydrocarbon units.

Geoclima is a major chiller manufacturer, based in Italy, offering customers around the world a wide range of refrigeration and air conditioning products and systems. The company is engaged in continuous research and development focused on exploiting technological advances to help customers meet key criteria linked to performance, energy efficiency and environmental impact. This commitment to innovation made the company the ideal partner for the Waitrose field trial.