“Honeywell’s HFO1234yf is proven to offer good performance with a reduction in direct emissions of 99.7%, keeping Atlas Copco ahead of regulation and supporting its leadership in terms of Eco Technology and customer benefits.” – Tim Florizoone, Team Leader Engineering, Quality Air Solutions, Atlas Copco

Best in Class through an Eco Technology

When Atlas Copco, a world-leading industrial group with a specialist air solutions division, was searching for a replacement refrigerant for its dehumidifiers in advance of incoming environmental regulation, the company conducted extensive research into the application of the new Honeywell HFO1234yf refrigerant, with an eye on launching a new ‘Green Range’. Honeywell’s HFO1234yf refrigerant has been developed as a replacement for R134a, and has already proven its effectiveness in several bench tests and field tests in terms of energy efficiency, environmental benefits, safety, performance and ease of adoption.

HFO1234yf is a near drop-in replacement for the R134a refrigerant, but with a Global Warming Potential of just 4 – a figure 99.7% lower than R134a. Moreover, HFO1234yf has an atmospheric lifetime of only
11 days, compared to 13 years for R134a and more than 500 years for CO2 (carbon dioxide). And, unlike HFCs and CFCs, which take decades to decompose, HFO1234yf does not persist in the atmosphere.

The Atlas Copco research proved the operational and emissions benefits of HFO1234yf over R134a:

Dehumidifiers remove water vapor from compressed air and are used extensively in industrial and commercial applications to create a dry-air environment. The process of air compression concentrates atmospheric contaminants, including water vapor which, in either a liquid or vapor phase, can cause a variety of operational problems, including the freezing of outdoor air lines; corrosion of equipment; and fouling of processes and products. 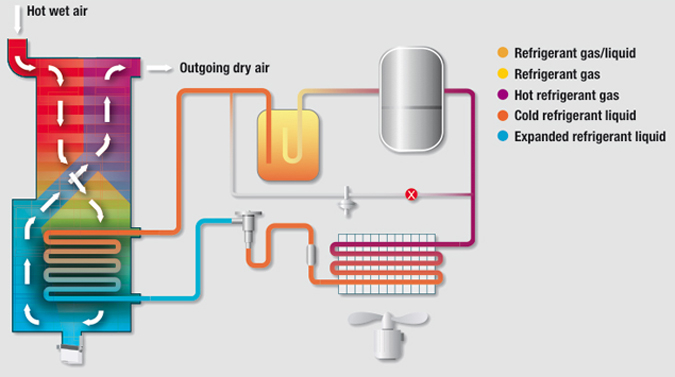 Atlas Copco was seeking a replacement for the R134a refrigerant currently used in its dehumidifiers and so conducted a series of tests using Honeywell’s HFO1234yf as a drop-in replacement, without any system modifications. The tests were intended to validate the new refrigerant in advance of the launch of the company’s Green Range, and involved a direct comparison of the ID71 and ID40 refrigerant compressed air dryer models using the original R134a filling and the new HFO1234yf .

Test procedure was as follows:

The results from the Atlas Copco tests confirm the excellent performance of Honeywell HFO1234yf using the same refrigerant charge and with no system re-design, proving its quality as a drop-in replacement refrigerant in Atlas Copco dehumidifiers for R134a. 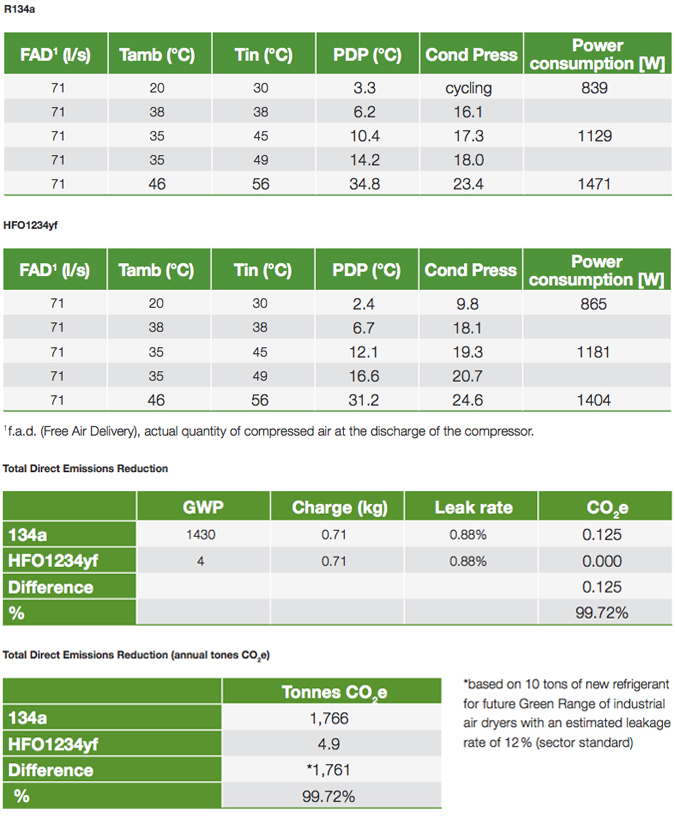 “The field research confirms a reduction in direct emissions of 99.7%, positioning Atlas Copco strongly in terms of incoming regulation and enhancing its competitive position regarding any potential future carbon tax regime.

Honeywell’s new HFO1234yf refrigerant is proving its credentials as a drop-in replacement for R134a in industrial and commercial settings. The refrigerant is ideally suited to the operation of dehumidifiers used to extract water vapor from compressed air settings in order to protect equipment from potential corrosion and to prevent consequent fouling of industrial processes. The new platform is a technology based on hydro-fluoro-olefins (HFO), with a GWP of just 4 – a figure 99.7% lower than R134a and compliant with incoming emissions regulations. HFO1234yf has an atmospheric lifetime of only 11 days, compared to 13 years for R134a and more than 500 years for carbon dioxide. And, unlike HFCs and CFCs, which take decades to decompose, HFO1234yf does not persist in the atmosphere.