“Following the main trends in the commercial refrigeration market, ASFRI’s technical collaboration with Honeywell and Cubigel Compressors is delivering product innovation in an era when the use of „green” refrigerants is a must.” (ASFRI, Manuel Calzada Forés)

ASFRI is a significant player in the design and manufacture of bottle coolers used in bars, at exhibitions and at special events. The Food & Beverage sector is increasingly focused on reducing emissions associated with refrigerant technology and the company set off a project to assess the performance of a new refrigerant from Honeywell that promises to make a significant contribution to its internal environmental strategy as well as that of its customers. Honeywell’s Solstice® 1234yf refrigerant has been developed as a replacement for R134a, and has already proven its effectiveness in several bench tests and field tests in terms of energy efficiency, environmental benefits, safety, performance and ease of adoption.

Solstice® 1234yf is based on hydrofluoro-olefins (HFO) and is a near drop-in replacement for the R134a refrigerant, but with a Global Warming Potential of just 4 – a figure 99.7% lower than R134a. Moreover, Solstice® 1234yf has an atmospheric lifetime of only 11 days, compared to 13 years for R134a and more than 500 years or carbon dioxide. And, unlike HFCs and CFCs, which take decades to decompose, Solstice® 1234yf does not persist in the atmosphere.

Working with its compressor technology partner, Cubigel Compressors, ASFRI applied the new Honeywell refrigerant to a representative cooling cabinet to assess the advantages of the new Solstice® 1234yf over R134a. The findings concluded that: 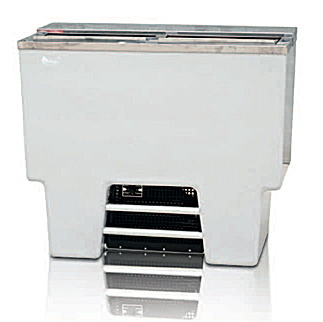 ASFRI follows a robust strategy when it comes to minimizing its impact on the environment. The company focuses on high quality bottle refrigeration cases manufactured from fiber glass, while delivering a robust sustainability and energy efficiency program.

This business ethos is borne out by its commitment to sustainability through design and manufacture, which includes built-in product longevity to reduce disposal frequency; 30–40% more lightweight design (against industry standard) to ensure easier, lower cost transportation; fiber glass construction to reduce end-of-life contaminants; and ultralow maintenance requirements and costs.

In its quest for environmentally friendly solutions, ASFRI developed a bottle cooler that would use Honeywell‘s ultra-low GWP refrigerant, Solstice® 1234yf. Proving the validity of each step of the process was critical and so the company involved its compressor technology partner, Cubigel Compressors, to develop a compressor for a beverage chiller application using the new Honeywell material.

A Cool Technology with Major Benefits

The studies undertaken by ASFRI tested the performance of Solstice® 1234yf as a potential drop-in alternative to R134a. The results confirm the excellent performance of Honeywell Solstice 1234yf using the same refrigerant charge as with R134a, with no system re-design.

1 Factor recommended by EPA (Environmental Protection Agency from the US) for CO2 only estimate for all passenger vehicles (http://ec.europa.eu/clima/sites/campaign/pdf/ ppt3-notes-en.pdf), source for 6kg/year of CO2 per tree planted.

The Eco-Friendly Solution for Compressor Systems

There is growing Food & Beverage market demand for the use of environmentally friendly solutions in commercial refrigeration applications – energy efficiency and low carbon emissions are already major drivers in this sector…and this trend is set to continue into the foreseeable future.

The ASFRI cooler certainly made a big impression when it debuted at the Chillventa exhibition in Germany in 2010 and at Climatización in Spain in 2011– particularly as Honeywell used the cooler to prove the effectiveness of Solstice® 1234yf by serving chilled drinks to visitors on its booth.

New regulations are on the horizon and manufacturers will increasingly look to solutions such as Honeywell’s new Solstice® 1234yf refrigerant, which is proving its credentials as a drop-in replacement for R134a in industrial and commercial settings. The new platform is a technology based on hydro-fluoro-olefins (HFO), with a GWP of just 4 – a figure 99.7% lower than R134a and compliant with incoming emissions regulations.

Solstice® 1234yf has an atmospheric lifetime of only 11 days, compared to 13 years for R134a and more than 500 years for carbon dioxide. And, unlike HFCs and CFCs, which take decades to decompose, Solstice® 1234yf does not persist in the atmosphere.