“As a leading UK manufacturer of commercial refrigeration products, Precision Refrigeration is doing its utmost to protect the environment and improve the energy efficiency of its products. Whether it be reducing heat loss from our factory building, using recycled packaging or using more environmentally-friendly materials, sustainability is always at the forefront of our thought processes.” (Nick Williams, Managing Director, Precision Refrigeration)

Every minute of the day, in every city, town and village in the world, businesses are dependent upon effective refrigeration to meet the needs of their customers. It’s an industry being challenged to reduce its environmental impact – and Honeywell has responded by offering OEMs a new generation of refrigerants capable of delivering ultra-low GWP(Global Warming Potential) combined with enhanced energy efficiency.

The technology – based on new Hydro-Fluoro-Olefins (HFO) – has been incorporated into the company’s Solstice® range together with already commercial pure HFOs like Solstice® yf and Solstice® ze. Two of the HFO blends have been recently specified in a comparative freezer counter test by UK-based Precision Refrigeration, one of the country’s most innovative commercial refrigeration companies. 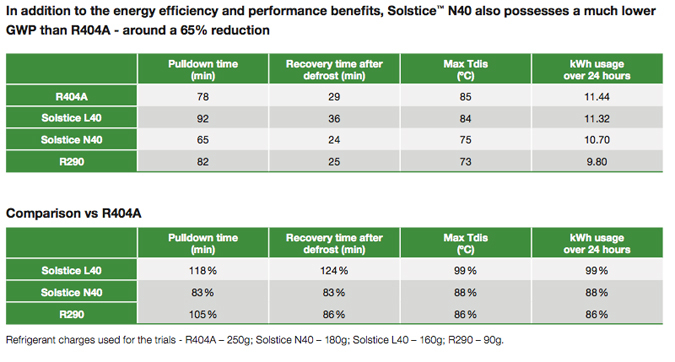 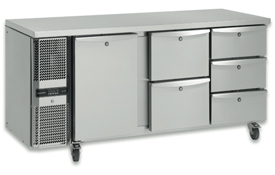 Precision has one of the lowest carbon footprints in the industry and sees its environmental commitment as a key competitive advantage as it serves to meet the refrigeration needs of some of the most demanding customers round the world. From gastronorm cabinets and counters to blast chillers and bottle coolers, Precision’s product line-up is installed in a variety of foodservice establishments including restaurants, hotels, bars, fast food chains and production kitchens. In line with its environmental commitments, Precision continuously investigates greener ways of working, so when Climalife UK introduced Honeywell’s Solstice® range as a more sustainable alternative to R404A for freezer products, the company agreed to run a comparative test.

The objective was to evaluate the temperature performance and energy consumption of a standard Precision LCU323 three door freezer counter cabinet (representative of any other models) using R404A as baseline vs. Solstice® L40, Solstice® N40 and R290 at climate class 4 (30ºC and 55% R.H.). The cabinet was commissioned to achieve as close as possible to an L1 temperature class. Temperature performance and energy consumption was tested to EN153 over a 24hour period, with the cabinet empty of product and the door closed.

The tests focused on four areas:

The results are summarized in the table on the next page and confirm that Solstice® N40 exceeds the refrigeration performance of R404A, delivers improved energy consumption and a similar discharge temperature to R290. Solstice® N40 also exhibits lower recovery time after defrost and significantly better pull-down time.

“Ensuring that we remain at the forefront of technologies that mitigate our impact on the environment is important not just for Precision but also for our customers, who can trust our equipment to remain at the leading edge of a lower carbon future.” Andy Fysh (Production Director) and Steve Goldsmith (Refrigeration Engineer), Precision Refrigeration

Restaurants, hotels and fast food outlets are under intense scrutiny to improve the energy efficiency and sustainability of their refrigeration systems and advances such as Honeywell’s Solstice® range have an important part to play in creating a more sustainable and lower carbon future. Solstice® is technology proven to deliver outstanding results across key metrics linked to energy efficiency, temperature, cost of operation and overall Coefficient of Performance (COP). Solstice® N40 is 100% non-ozone depleting, possesses low toxicity (ASHRAE class A) and is nonflammable (ASHRAE class 1), which makes it significantly safer in use than alternatives such as hydro carbons and ammonia.