“We conducted through studies and extensive testing proving HFO-1234yf is a technically viable environmental alternative to R134a in our climate systems for buses and coaches. Our results are supported by CDTI (Centre for the Industrial Technological Development, from the Spanish Ministry of Science and Innovation).” Jacobo Gutiérrez García – Market Manager, R&D Engineer (Hispacold)

The EU’s Mobile Air Conditioning (MAC) Directive, effective from January 2011, prohibits the use by automotive manufacturers of refrigerants with a global warming potential (GWP) higher than 150 in new vehicles.

Honeywell has developed a globally compliant replacement for R134a refrigerant – HFO1234yf: a technology that provides a compelling proposition to the automotive sector as a result of its energy efficiency, environmental benefits, safety, performance, ease of adoption and overall effectiveness. The newly-developed HFO1234yf refrigerants platform is based on hydro-fluoro-olefins (HFO) and is a near drop-in replacement for R134a, but with a GWP of just 4 – a figure 97% lower than the new regulation requires for Automotive and 99.7% lower than R134a. Moreover, HFO1234yf has an atmospheric lifetime of only 11 days, compared to 13 years for R134a and more than 500 years for CO2. And, unlike HFCs and CFCs, which take decades to decompose, HFO1234yf does not persist in the atmosphere.

These impressive features attracted the attention of Hispacold, a leading manufacturer of climate systems for buses and coaches, which was seeking an alternative to R134a and decided to conduct an extensive research exercise to compare the new Honeywell refrigerant and other alternative refrigerants, like CO2, with 134a-based system.

The outcome proved the fuel efficiency, energy and emissions benefits of HFO1234yf.

Hispacold had been working to develop a climate system solution for buses and coaches far ahead of the potential transposition of the MAC Directive to road transport in order to affirm its strong position in their sector. Although competition is intense, Hispacold is the only company responsible for end-to-end climate control unit production, giving the company unrivalled whole-system knowledge and know-how.

The spirit of innovation that has defined Hispacold for over 30 years was applied to its research into a new refrigerant that would meet both the future potential MAC Directive targets and the company’s broader commitment to sustainable development – a key driving force behind their innovation strategy. Hispacold’s pursuit of being best-in-class in climate controls, blowers and compressors is extended now to include refrigerants in this strategy view.

In order to find a replacement for R134a – one that would meet the company’s energy-efficiency and sustainability objectives as well as its future potential regulatory commitments- Hispacold conducted laboratory research involving a rooftop unit with condenser and evaporator (model 12S) to assess the relative performance of both Honeywell HFO1234yf and CO2 with the original 134a-based system.

Both fluids had previously undergone risk assessment (life, endurance, crash….) in automotive sector, which had proven them to be safe in terms of toxicity and flammability (ref. CRP150-1, EPA; performed for the SAE (Society of Automotive Engineers) by Gradient Corporation).

However, following initial bench tests by Hispacold with the CO2 system, it was discarded, because performance was confirmed not to be acceptable above 30ºC and overall system cost was higher.

The bench test of the complete rooftop unit compared the performance
of Honeywell’s new HFO1234yf refrigerant against R134a. 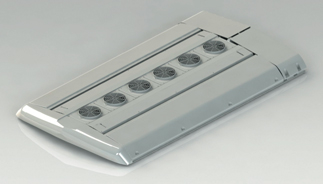 An Eco-Friendly Innovation for Hispacold

“We conducted thorough studies and extensive testing of Honeywell’s HFO-1234yf. These studies showed HFO1234yf is a technically viable environmental alternative to R134a in our climate systems for buses and coaches. It also is an essential dropin to R134a systems with similar efficiency to R134a. Our results are supported by CDTI (Centre for the Industrial Technological Development, from the Spanish Ministry of Science and Innovation). We look forward to extensively using this new refrigerant in our products in the market, so we can reduce our carbon footprint.“
Jacobo Gutiérrez García
Market Manager,
R&D Engineer (Hispacold)

“We have evaluated CO2-based systems. However performance is drastically reduced above 30ºC ambient temperature, which significantly reduces market potential at this moment. We have thus focused our efforts on HFO1234yf, which is proven and supported technology selected by several automotive manufacturers to replace R134a.”

The Cool Technology that is Supporting a Sustainable Automotive Industry

As the automotive industry seeks solutions both for ever-tightening emissions standards and to meet the demands of consumers for more fuel efficient and eco-friendly technology, Honeywell’s new HFO1234yf refrigerant is proving its credentials as a drop-in replacement for R134a. The new platform is a technology based on hydrofluoro- olefins (HFO), with a GWP of just 4 – a figure 97% lower than the new MAC Directive requires for Automotive and 99.7% lower than R134a. Moreover, HFO1234yf has an atmospheric lifetime of only 11 days, compared to 13 years for R134a and more than 500 years for carbon dioxide (CO2). And, unlike HFCs and CFCs, which take decades to decompose, HFO1234yf does not persist in the atmosphere.