“The benefits we are seeing are very much a combination of ASDA system optimization and favourable properties of the refrigerant. I feel the most important aspect of this conversion to Performax will be its unparalleled efficiency and lower GWP versus R404A, which will enable us to reduce both direct and indirect emissions. I am impressed by the energy improvement.” -Brian Churchyard, Head of Refrigeration at ASDA.

Supermarkets around the world are coming under intense scrutiny to prove their credentials when it comes to environmental impact and sustainability. Honeywell has responded by developing a new refrigerant blend – Genetron Performax® LT – which is delivering outstanding results across key metrics linked to energy efficiency, carbon footprint reduction and running costs. In the latest field test – completed with ASDA, one of the foremost supermarket chains in the UK – the new Honeywell refrigerant was assessed against the commonly-used R-404A and R-407A.

The results proved Genetron Performax® LT to be the best performing refrigerant currently available for supermarket installations. Unlike R407A, Genetron Performax® LT can be used in both low temperature and medium temperature applications. The refrigerant delivered impressive results due to its higher capacity and efficiency and a GWP that is nearly 50% lower than R-404A and 15% lower than R-407A.

ASDA has made a public commitment through its Sustainability 2.0 agenda to reduce the environmental impact both of its own operations and those of its supply chain. The ambitious goals for 2015 (compared to 2005 levels) include:

A key contributor to these targets for ASDA is the identification and application of eco-friendly refrigerants used to preserve meat and dairy products, with a particular focus on reducing energy consumption (and cost) and lowering carbon emissions through improved GWP. Following a successful laboratory test of Genetron Performax® LT, ASDA embarked on a full-scale field test of the Honeywell refrigerant at its new Hunts Cross store in Liverpol (UK).

To ensure the robustness of the project, a dedicated team of professionals was set up to run the trial. In addition to the involvement of ASDA’s Head of Refrigeration and Energy Manager, the team included representatives from Honeywell Refrigerants Technical Management, Emerson Climate Technologies (Copeland scroll compressors), AGas, BJA Consulting, CBES Constructive Solutions and City Holdings. The Hunts Cross store was chosen because it had two identical MT (medium temperature) systems, which would allow for accurate comparisons of Genetron Performax® LT alongside R-404A and R-407A (see Fig. 1).

In order to ensure like-for-like comparisons between all three refrigerants, System 1 was converted from
R-404A to R-407A and performance and energy consumption measured over a 12 months period. System 2 was then converted from R-404A to Honeywell Genetron Performax® LT.

A thorough evaluation of the results by the entire project team confirmed for the Hunts-Cross store the power consumption shown in (Fig. 2).

The figures below show the energy consumption of the retrofitted pack. 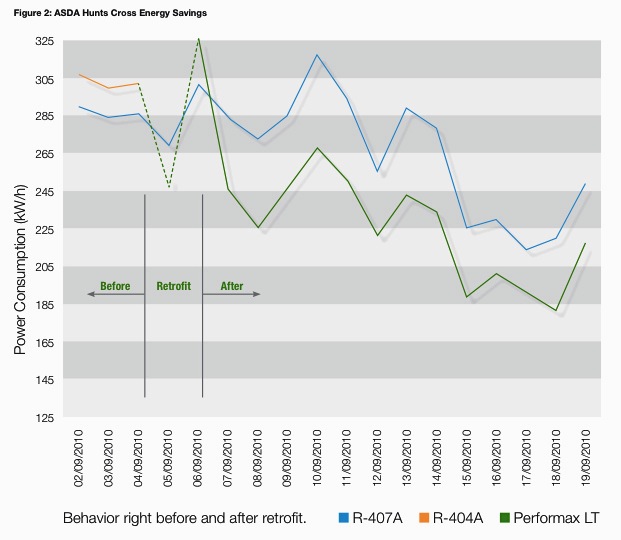 The analysis (Fig. 3) below shows the impact of refrigerants on a standard store similar to the Hunts Cross store carbon footprint and on the system operating costs, based on a 15 year life-cycle assumption and taking account of compressor energy consumption only. All other energy usage is assumed to be the same for all refrigerants. The results show significant emissions and cost advantages in using Honeywell Genetron Performax® LT over R-404A and R-407A across a range of operating conditions. The cost of retrofitting is not included. 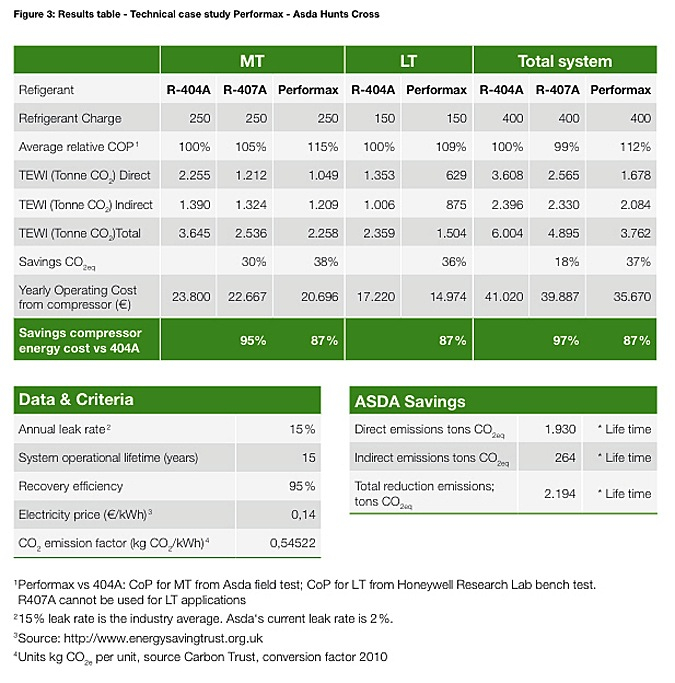 A Win-Win Result for ASDA

“The benefits we are seeing are very much a combination of ASDA system optimisation and favourable properties of the refrigerant. I feel the most important aspect of this conversion to Performax will be its unparalleled efficiency and lower GWP versus R404A, which will enable us to reduce both direct and indirect emissions. We have killed two birds with one stone; I am impressed by the energy improvement; this will bring us great opportunities when rolling-out this conversion also to LT packages and other stores”.
Brian Churchyard, Head of Refrigeration at Asda: ASDA will extend this program to the rest of refrigeration packs (MT and LT) in Hunts-Cross and use this experience for the further roll-out of conversion to Performax in other stores in the UK.

Rolling Out the Benefits of Performax LT Around the World

The ASDA Field Test confirms the excellent performance and energy efficiency of Genetron Performax® LT and the potential for significant energy savings and carbon footprint reductions among supermarket operators.

Genetron Performax® LT outperforms alternative refrigerants across all ambient conditions – a benefit confirmed by subsequent retro-fit projects in the supermarket sector – creating potential for extended application into storage and packaging areas. The efficiency of the Honeywell refrigerant also provides potential for enhancing overall profitability – a true win-win situation when emissions reduction is factored in. Industry-indicative results confirm the ASDA experience, with Genetron Performax® contributing up to 15% savings in energy bills, a 40% reduction in CO2 emissions and 10% lower running costs.